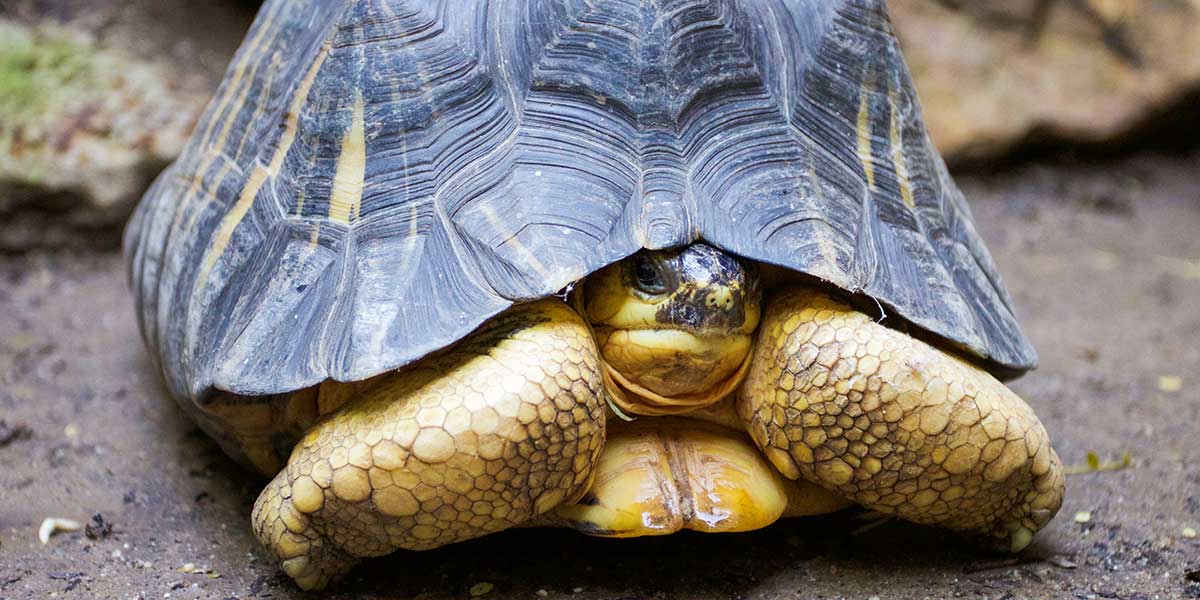 ”They follow us, walk in circles around us, and brush up against us, and seem to enjoy shell scratches. Sure, they move slowly, but they are very engaging. They also are attracted to bright colors, like shoes, and walk towards them.

Will Work for Food

At the Zoo, the radiated tortoises eat dandelion greens, cilantro, kale, collard greens, grass hay, herbaceous plants, and specially formulated low-starch/high-fiber tortoise pellets. Keepers position the food around their enclosure so the tortoises have to “work” to get it, encouraging them to be active. Enrichment includes cactus paddles, which the species eat in the wild. Fun fact: the paddles are often sourced from the Zoo’s own prickly pear plants.

In 2011, Utah’s Hogle Zoo and the Turtle Survival Alliance (TSA) started a public awareness campaign about tortoise conservation in Madagascar, including an eight-minute long video about the crisis.

Video courtesy of the Turtle Survival Alliance and the Orianne Society

In January 2018, the Association of Zoo’s and Aquarium (AZA) added radiated tortoises to their SAFE: Saving Animals from Extinction initiative, bringing the number of SAFE species to 14.

SAFE combines the power of zoo and aquarium visitors with the resources and collective expertise of AZA-accredited zoos and aquariums and partners to save the most vulnerable wildlife species from extinction and protect them for future generations. For more information, visit https://www.aza.org/aza-safe

You can help the thousands of radiated tortoises that were confiscated from illegal wildlife trafficking in Madagascar (see story above).

You’ll look stylish, too! Proceeds from these conversation-starting, limited edition tortoise T-shirts, hoodies, and cellphone cases go directly to the care and rehabilitation of the confiscated tortoises.

The Santa Barbara Zoo supports this effort by Zoo Knoxville, Oklahoma City Zoo, Utah’s Hogle Zoo, and the Turtle Survival Alliance and urges you to as well.

It is all part of the Association of Zoos and Aquariums’ SAFE program, which brings together AZA-accredited facilities, researchers, and conservation organizations to multiply the impact an individual zoo might otherwise have in saving a species.

Multiply your impact – buy a hoodie for a pal. Get your tortoise gear here. (Don’t understand the shirts? Hint: it’s based on a children’s book by Roald Dahl.)

In Madagascar, huge numbers of radiated tortoises destined for the black market in Asia have been recently confiscated and rescued.

Nearly 70 conservation-related organizations globally, including 38 AZA zoos and aquariums, have rallied to help the confiscated tortoises by sending medical supplies and personnel, and contributing funds.

Why are the numbers so high? The majority of the smuggling of these animals out of Madagascar is due to the black market pet trade. But in Asia, radiated tortoises are also considered a delicacy and are believed to have aphrodisiac powers. A live radiated tortoise can fetch the equivalent of $1,000 to $2,000. Madagascar supports nearly 5% of the plant and animal species on Earth, but is only around the size of Texas. The island is also home to hundreds of species found nowhere else on the planet, such as radiated tortoises, lemurs, and fossa.

Radiated tortoises are critically endangered on the IUCN Red List. Should current declines continue, the species could be extinct in the wild within the next 45 years.

What You Can Do:

Be an advocate for the environment when you travel by visiting or supporting local animal conservation organizations. Share your experiences with others to help raise awareness of the challenges faced by animal species around the world.